The quest for an always-on internet connection is almost at an end!

As if to assure me it was worth it, within 24 hours of Virgin Media connecting my secondary (failover) broadband connection the "primary" BT line went down. Again. For the third time in as many months. This time, however, I was prepared and had a backup connection and could carry on working.

The BT engineer that came this time was very helpful. Bordering on apologetic for the fact I'd had so many visits of late. So much so he gave me his phone number in case it happens again and he'll try to personally fix it.

Apparently, the reason for my repeated issue is a dodgy chip on the card in the cabinet. He asked to be allowed to move my to another card but "they" said no. He logged the card as faulty, but said it would "be months" before anything is done.

For now though both are online and it was a massive relief to see both WANs go green on my router, as below: 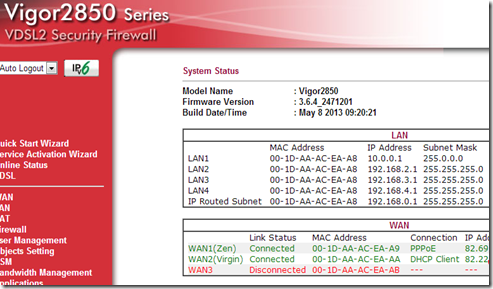 With load-balancing enabled between the two WANs I'm getting the following speeds according to Broadbandspeedchecker.co.uk

Not that I'm overly-bothered about the actual speeds I get. In fact I don't care at all about the speed. All I care about is reliability of the connection. Which is what I feel I now have. Whether the Virgin connection is any more reliable than BT's remains to be seen. The reliability, I'm hoping, will stem from the fact it's unlikely (touch wood) that both will develop problems at the same time.

How It All Looks

For the curious, this is how it all looks: 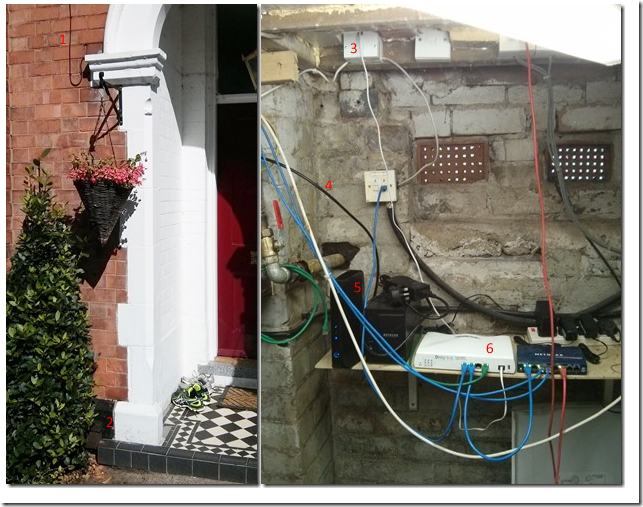 What you can see above (front door on the left and cellar on the right):

1. The BT line which comes across the street, down the house, through the front door's frame and then down in to the cellar.

2. The Virgin Media cable comes out the ground, through this brown box, through the wall and across the cellar.

3. The BT line comes in to this master socket and then an RJ11 cable connects it straight to the router (6).

4. This is the coaxial cable from the Virgin Media (2) and connects to the back of Virgin's "Superhub" (5) which is their supplied router. It's connected to the WAN2 port on the router (6) using the green patch cable.

5. Virgin Media's router which is operating in "modem only" mode.

6. The Draytek Vigor 2850 router. Notice it's the non-wifi version. The red patch cable you can see goes off to the loft, where the WAP lives. I find the WAP provides much better whole-house coverage when it's above the rooms (no brick walls to go through).

That's all there is to the kit needed.

Notice the lack of a BT OpenReach modem. Not using BT's kit means I'm breaking their T&Cs and am unsupported. The BT modem is in a cupboard. Primarily because it's the property of BT, but also because if I have to call out a BT engineer I need to plug it back in before they get here and pretend it was always there. BT (apparently) charge ~£180 for a callout where it turns out to be a problem with your own kit. Before you log a call be sure to plug BT's modem back in and check that that too can't connect. Don't mention the non-use of a BT modem when you call your broadband provider!

As far as configuring the Draytek router goes this is something of a pain. Once you have it working make sure you use the router's Configuration Backup function to store the config somewhere safe. Then leave the router be.

Getting it working took me way longer than I'd hoped. I'm not going to talk about you do it in detail. All I will say is that if you can't get it to work following the online guides, then call Draytek's "internet connectivity helpline" which is how I finally managed to get it working.

Again, I can't emphasize this enough. If you find yourself struggling to get both WANs connected (like I did) then call Draytek's helpline. Don't waste time in the forums like I did. Where all the talk seems to be the order in which each piece of kit needs rebooting. Draytek's admin interfaces suck, but luckily, their helpline doesn't.

As somebody pointed out the last time I discussed this the problem is knowing when one of the WANs has failed. If you only find this out when the other goes down then you have neither. To get round this you can use the router's email notification agent to tell you when either WAN fails. I've not been able to get this to work yet (the admin interface really does suck) but will continue to try and post back here when I do.

The Draytek kit isn't the average bit of consumer equipment, costing ~£180 for the 2850. So, already this is an expensive exercise. On top of that Virgin Media has a setup fee of £49 (followed by a six month offer of £16 per month for for six months) and then £27 thereafter for their "up to" 60MB connection.

So, per month, I'm now paying about £75 a month. Although, technically, it's the company paying and so the VAT comes off those prices (20%) and I pay no income tax on it, which means the cost to me personally is about £40 a month.

For a home user this is probably all a bit OTT. However, for somebody who works at home and can't, in effect, work at all without an internet connection then this setup is a must-have. The actual cost is negligible when compared to the cost of being without the internet.

Some of you may think I'm crazy spending more than twice the amount I could get a single connection for. Personally I think it's money well spent.