Adding even more functionality to Flex "view" I've been building I've now added a "toggle column" to the list of available column types: 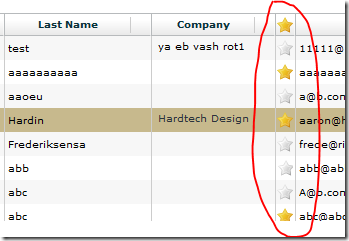 The idea is simple. You click the icon in the column to toggle a field value on the back end document. The icon in the view is either on or off and is dictated by the value stored in the field. It's an idea I've mentioned before which I've now made into a re-usable and customizable component.

In this example I'm using the idea of being able to mark certain contacts as favourites and you can see a working example in the Contact Manager app. The component itself can be re-used in almost any scenario though.

Adding a toggle column to a View is as simple as adding one line of XML to the View's configuration, which is specified in the backend Domino database, as discussed previously.

As you can see it's fairly easy to configure and customize. You can easily change the icon, field name and what the "on"/"off" values should be for the field. You can also add a tooltip for the column.

The Column value of "starred" refers to the name of the XML node of each document which holds the field value we're interested. When the grid is first loaded it will show the icon as on or off depending on the value in the "starred" node.

To see the XML used in the demo open the Contacts view as XML. This is the XML format that defines the structure and data of the View component. Simple, no?

If you want to go further than simply modifying a single field at a time and want to perform a more involved action then you can do what I tend to always do and add a self-referencing "computed for display" field to the backend Domino form called something like "Action". In the WQS agent you can then check the value of this field. If the value is something like "Approve" then you can run a set of actions against the document.

In this scenario the XML data for each row just needs to define a true/false value to let Flex know whether to show the icon as on or off depending on whether it's approved or not. The value for the fieldValueOn would be "Approve" and for fieldValueOff it would be "Unapprove". The actual XML data for approved documents would be "Unapproved" and for unapproved documents the column value would be "Approve". If that makes sense.

In the next couple of days I'll update the downloadable version of the app with updated Flex source code. Before I do I want to blog about another addition to the code -- the ability to store a user's choice of columns across sessions using the Flash/Flex equivalent of cookies - the SharedObject. Give me a day or three.